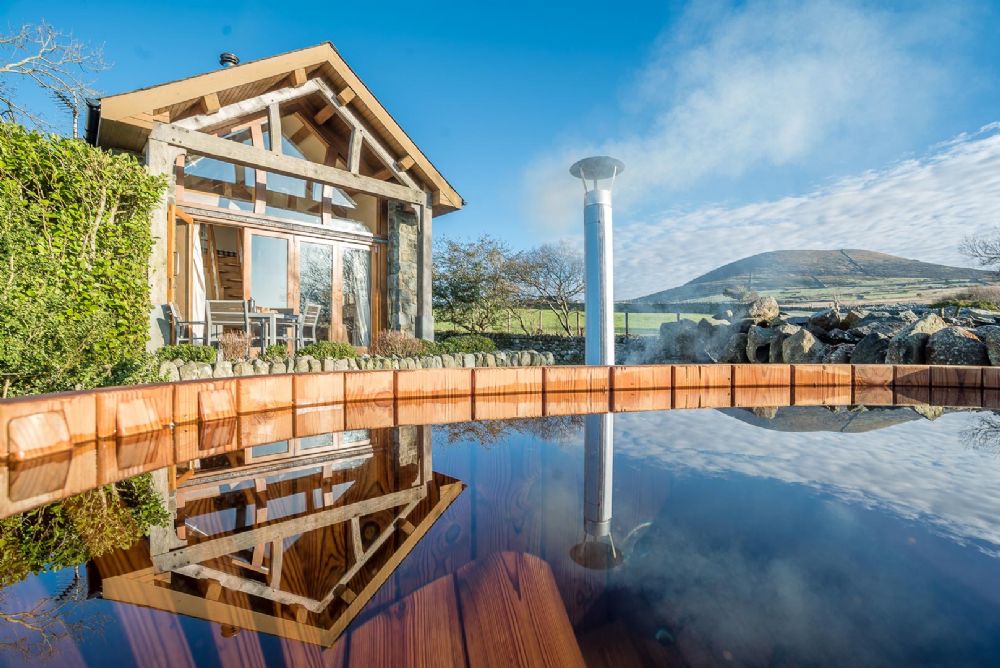 Self Catering Barn Conversion on a Working Snowdonia Farm | Nant

Nant, which means brook or spring in welsh and refers to the small brook that runs past this cottage, is a two bedroom self catering barn conversion in Dyffryn Ardudwy. It's difficult for me to be objective when describing Nant as it's the larger of the five self catering cottages that we let out ourselves here on the farm. But I hope you’ll agree when I say they’re nicely furnished and decorated.

Using local craftsmen to completely rebuild an old disused barn, has meant that we’ve been able to use as much natural and local material as possible. Nick and Adam did most of the structural work including laying the natural slate tiles on our heated floor. Mike, a carpenter from the village, hand carved the oak trusses and glazed gable end. Whilst stonemasons, Charlie and Rich, two brothers and friends of ours, did a brilliant job of the external granite stonework. (I was allowed to help with the unskilled but backbreaking work of fetching the stones from the fields.

The cottage comprises a ground floor twin bedroom in addition to a king-size double in the ‘grogloft’ or eves of the barn. The living area downstairs has a small kitchen where we’ve tried to include everything you’ll need including a combination oven, hob, and dishwasher. The oak folding doors which span the south-facing gable end of the cottage can be opened up completely to make the most of the view of the fields and mountains on the far side of the brook. The underfloor heating provides more than enough heat but we’ve also installed a cast iron log burner to help create that romantic atmosphere.

We’ve tried to buy the best fixtures and fittings possible. Including hand made brass lamps, oak furniture, and real leather sofas. The bathroom too has been kitted out with a powerful thermostatic shower and expensive taps etc. But more importantly, perhaps we’d like to think that we’ve invested some time and effort into smaller projects like renovating an old cast iron radiator for the bathroom, making the curtains by hand, restoring some old furniture bought at our local auction, and buying some nice ornaments made by friends and neighbours.

Nant is on the grounds of our farm here at Byrdir. There are lots of advantages to staying on the farm….. It’ll give you a chance to get involved in things like feeding the pigs, collecting the chicken eggs, and meeting the ducks. Throwing a stick for our border collie, Dell seems to be the favourite pastime of a lot of our guests. Great views in every direction. Views over the Cambrian Coastline and its sandy beaches a mile to the west, Snowdon and her friends are to the north and you are naturally encouraged to explore the rugged Rhinnog Mountains that climb up behind the cottage to the east.


Please note, additional logs need to be purchased to heat the hot tub (available locally). Warming the water will take time and and some attention.

Nant is a converted barn on our farm here at Byrdir which sits above the village of Dyffryn Ardudwy. The village provides all the basic needs for our guests. There’s a small grocery store, an excellent butchers, a post office, a garage and two cafés. If you want more choice a 15-minute journey in the car will take you to the bustling seaside town of Barmouth. A 15-minute drive to the north will take you to the renowned castle town of Harlech. Both towns have a slightly larger selection of shops, cafes and restaurants.

This part of north wales is of course famous for outdoor activities. You can be zip lining at 100mph eighty feet above the ground in the morning and exploring historic slate caverns one mile below ground in the afternoon. Spend one-day white water rafting down the fierce Tryweryn River and the next climbing up the steep slopes of Snowdon. You might prefer to throw yourself down the testing mountain biking trails of Coed Y Brenin or you might prefer a more relaxing day riding the narrow gauge Ffestiniog Steam train up to Tan Y Bwlch. The worlds your lobster here in Snowdonia!
... Read MoreLess

Getting availability
Summary
Nights
For
Total Cost (inc booking fee)
Sorry, but your searched dates are not available for this property

We had a super week at Nant and absolutely loved it. The location is brilliant, so handy for the coast and yet it feels like a different world being so quiet and rural. The cottage is great, very cosy and comfortable. We loved the hot tub too. As others have said, it takes a long while to heat up the first time but after that we found it retained its heat well and just needed a bit of a boost. Star gazing in the hot tub was a wonderful experience as was basking in the heat in the rain! The cottage is south facing so doesn’t have quite the same sunset view as some of the others, but it does have lovely views over the fields and hills. We hope to visit again. Thank you.

We had a fabulous, tranquil, relaxing week at Nant. All home comforts are supplied, hot tub was lush! Loved the daily visits from the dogs and chickens too! Great location for everything!! Hope to holiday again with you soon!! Thank you, the OBrien family x

Beautifully renovated and well equipped cottage. Everything you need, in a lovely, peaceful setting near to all the town’s amenities, and stunning coastline. The kids enjoyed meeting the dogs, and loved the hot tub. We felt secluded although the property is close to the other rentals and the owners.
We have an electric car, so the charger on site was a real bonus.
Worth knowing in advance that local pubs get booked up far in advance in peak season, and the hot tub does take a few dedicated hours to heat up…

Nant is a really lovely cottage in an idyllic spot. The views and the sunsets were amazing! Louise and her family were really welcoming. I would not hesitate to return and to recommend.

We have used few Dioni’s cottages before but this place is our favourite so far. Beautiful location, super friendly and happy animals, delicious cake and eggs and friendly owners next door – pure heaven. The barn is just outstanding and very clean. We will go back again! Thank you 🙂

We had a lovely, relaxing 2 nights here. As it was on a working farm, we didn’t know what to expect, but everywhere was spotlessly clean and it was just like staying in an ordinary cottage. We didn’t see the owners and apart from the sheep in the field opposite, and a couple of horses on our walk, we only saw 2 hens and a dog near the cottage – so don’t let a farm put you off staying here!

The cottage is compact but had everything we needed for a party of 2. We slept in the bed in the mezzanine & used the downstairs bedroom as a dressing room (as there is no storage in the upstairs bedroom). We didn’t use any of the cooking facilities as we ate out. We can recommend The Bank and The Norbar. Both are in Barmouth & need to be booked well in advance of your stay.

The hot tub was lovely, but beware – it gets extremely hot! Also, take some extra towels as you are only provided with one towel each & we found it difficult to dry our towels between uses,

As mentioned in other reviews, there are some lovely walks straight from the cottage, which we really enjoyed doing.

We had a really lovely stay and will definitely return again.

Lovely accommodation for our first family break. Beautifully set in the hills with good access to the nearby tourist spots. My small children particularly loved seeing the farm animals and the eggs were delicious.

Beautiful accommodation and a lovely welcome. It’s a magical place.

Start the hot tub 5-6 hrs before you need it, but if you do it’s a great place to watch the sunset!

This was our second stay at Nant and we will no doubt be back again. It is in a beautiful setting, so peaceful yet close to beaches and mountains. Cycling straight from the house you are greeted with spectacular views and coming home to a hot tub is certainly an added bonus. This time, blessed with sunshine we managed to climb Snowdon and visit the local beach. A real gem- we would highly recommend a visit!

We had a lovely stay in Nant.
The kids loved playing with the animals and in the hot tub, excellent location to explore Snowdonia. We walked up Cadair Idris, visited Harlech Castle and did Canyoning (all are very recommended).

A very special place indeed. The barn is superbly finished and occupies a wonderful position, with spectacular views of the land and sea (especially from the tub). We loved being visited by the dogs and the hen, who were all such characters. The location provides a good base for exploring the local area, but you could equally just stay put and enjoy the surroundings. Our hosts were both welcoming and unintrusive. Louise\\\’s lemon cake: simply delicious! We will be back.

Lovely property, well appointed and easy to find with stunning views down to the sea. The Welsh weather threw everything it could at us during our short stay, but the cottage was extremely cosy in spite of that. Great location for exploring the coastline. Far enough off the main road to feel properly rural and secluded, but with easy access when needed. Would definitely consider staying again.

Leave a Review for Nant